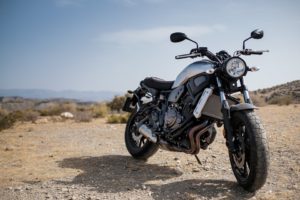 If you are the proud owner of a sleek motorcycle, it is likely that the possibility of your prized possession being stolen has crossed your mind more than once! The ways and means by which motorcycles get stolen are way too many to list. From joy riders to petty thieves to professionals, there are a large number of people out there just waiting to lay hands on a motorcycle that is not legally theirs.  According to the National Insurance Crime Bureau (NICB), more than 44,000 motorcycles were reported stolen in 2017. California, Florida, and Texas topped the list of states with the most such motorcycle theft while Honda, Yamaha, and Suzuki motorbikes were the hot favorites with motorcycle thieves during the same period.

While there is no foolproof way of preventing motorcycle theft, there are a good number of precautions that you can take to minimize the risk of your vehicle being stolen. Here’s how.

Securing your motorcycle with one or more types of locks can prove an effective deterrent to prospective thieves. You do not have to be a locksmith to know how to use these two common kinds of motorcycle locks:

Being smart about where you park your motorcycle might be the difference between keeping it and losing it! Some things to keep in mind to avoid a motorcycle theft while parking are to stay:

Technology offers you some security methods which can come in quite handy in safeguarding your prized possession. They include:

While this might seem like you are being over cautious, it is also not a good idea to assume that your motorbike is secured well. Be on your guard, especially when at places like races, motorcycle gatherings, and other such crowded occasions.